The overhanging shadow of the financial crisis is large but some of its impacts are less well-known than others. In Greece, the economic recession undermined the mental health of many Greeks who rapidly lost everything they had. The Klimaka suicide helpline was conceived at the beginning of the crisis to listen to those needing to be heard.

One, zero, one eight. Four numbers that can be dialed on the phone by those deliberating ending their own lives. These numbers may also be dialed by a sibling, cousin or friend who may be afraid about losing someone to suicide. One, zero, one, eight. Four numbers that offer someone with whom they can talk, cry and even save their life, because on the other side of the line – on the front line – professional psychiatrists and psychologists from NGO Klimaka will be waiting for them.

Klimaka was founded in 2000 with the goal of providing mental health services. When the economic recession erupted in Greek homes eight years later, the NGO decided to create a 24-hour suicide prevention lifeline. “Unemployment or economic problems are stress factors that a vulnerable person has to confront,” explains the Head of Projects and Strategy Units NGO Klimaka, Olga Theodorikakou. “We knew that suicide was a matter of crisis. It was a matter of how a person feels for specific days, weeks, even months. If you could confront this crisis and the person would be treated, you could prevent suicide.”

Studies have shown that there is not a direct correlation between the rise of suicide rates and the economic crisis. However, since the first austerity measures were implement by the PASOK government – headed by former prime minister, George Papandreou – and especially after the implementation of the first bailout program, the attempts and acts of suicides have not stopped increasing.

“It is known that people who are susceptible to depression are more likely to worsen when they are in distress or are experiencing stressful situations. More people are under stressful situations in times of crises; financial difficulties can be hugely important in modern life. However, depression is very complex. Socio-economic conditions interact with personal circumstances and, of course, genetics in ways that we do not fully understand,” explains lecturer in Public Health at the Imperial College of London and co-author of ‘Medium-term impact of the economic crisis on mortality, health-related behaviors and access to healthcare in Greece,’ Mr. Filippos Filippidis. 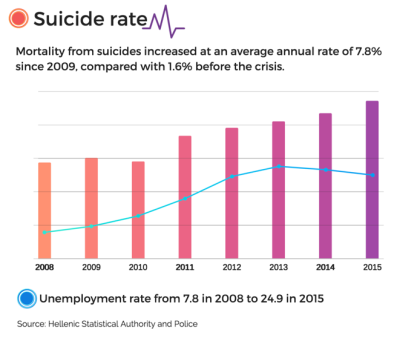 Between 2009 and 2013, the health expenditure declined by €5.2 billion – cut by over one third in real terms. With a lack in funding, mental health services struggled to keep up with the increasing burden of mental disorders. Since 2013, 40 suicides have even taken place in hospitals and health units.

Klimaka was also facing their own economic problems since, as an NGO, they did not receive any financial support from the government at that time.  However, the lack of assistance to mental illnesses related to suicides pushed them get a step ahead of government institutions by creating the helpline, for those lacking hope, in 2008.

“Although at least 90% of people who commit suicide have a mental health disorder, the lack of access to quality mental health services also has to do with the crisis. We had seen citizens’ initiatives provide services that were lacking, such as social pharmacies or social medical centers run by volunteers and doctors. We knew that [a helpline] was something that was missing from Greece, that there were no services like that in comparison with other countries like the UK,” explains Olga Theodorikakou.

Olga, who has been involved in this initiative since its inception, has witnessed how politicians were interested in using suicide to benefit their own political agenda. “[Majority] government in 2012 were denying that suicides were increasing. [The opposition] in 2012 were saying ‘we have 10,000 suicides that are being committed due to austerity measures,’ which is untrue,” Olga Theodorikakou explains. Rather than using suicide as a political tool, Klimaka called for a national suicide prevention strategy.

Instead, the government responded in a different way and Klimaka’s situation changed in 2012. The New Democracy government recognized their work and began funding them. Since then, Klimaka is funded under the Ministry of Health and one, zero, one, eight has become the national phone number for suicide prevention. Today, Klimaka’s helpline attends around 16,000 calls per year, though not all calls are from high-risk patients but also from family or friends seeking professional counselling.

As with the majority of Balkan countries, there is a strong historical Christian Orthodox influence in Greece, where roughly 98% of the population, today, are officially considered Greek Orthodox. Death and religion are inseparably tied, influencing how people view suicide in Greek society. As professor Filippidis asserts, “suicide has not traditionally been socially accepted in Greece which can contribute to the low suicide rates.” Greece is one of the European countries with the lowest rates – second, in fact, just after Cyprus. In 2015, 529 suicides were registered in Greece while in countries such as the UK, 6,639 were recorded.

At Klimaka, Olga says they believe that the number of suicides is actually much larger than the one that is being published. Even though medical death records may indicate that a person has died because of an accident, in Olga’s experience, Klimaka knows that it may, in fact, be a suicide and the family has hidden the truth from fear of being stigmatized. “In some villages or even outside Athens, Greeks deny burying a person who has committed suicide.”

Because of this, Olga Theodorikakou emphasizes that one of their most important responsibilities is to make people understand that mental disorders are just like any other medical need and that in more than 90% of the cases, suicide can be prevented. “We have to give them the treatment needed. It is like any other medical need. If I have a headache, I will take a pill. If something else aches, I have to receive treatment. Mental health is something that may lead to death. It mostly has to do with impulse. That’s why prevention is so feasible.”

However, this goal becomes difficult because of two types of obstacles. On the one hand, there is no physical connection between the person calling for help and the Klimaka professionals behind the phone. “We know that if a person comes here, we do will do our best not to lose him or her,” Olga says. For the people Klimaka treats, the mental health professionals try to refer patients to centers on the patients’ side of the country where they can receive proper treatment. Olga explains that Klimaka’s biggest frustration is when there is no nearby available public health services to where Klimaka can refer patients for follow-up treatment.

Filling the gaps in times of crises

And despite the relatively low numbers, Olga Theodorikakou says that each suicide is a loss for society itself. “What we say is that Greece losses in a bureaucratic way as well. We lose people of a productive age, people that could contribute to society. Society has to do something about that.”

Overall, the number of cases of depression has increased at an alarming rate in Greece during the economic crisis with an estimated 500,000 people suffering from depression in 2015. As a result of personal debt and threats of home repossession, rates of involuntary psychiatric hospitalization by court order have been soaring in recent years, from 57% in 2012 to 75% in 2014.

Hopefully the GDP growth and the expected stabilization of the economic landscape with the end of the third bailout program will bring more hope for Greeks who have struggled to stay standing through all the economic struggles of the last decade.

Klimaka’s phone keeps ringing every day. In some seasons they receive a higher concentration of calls but not necessarily because of a rise in suicidal thoughts. More and more, knowledge of their work is being spread throughout the country. With more discussion, people will be more able to break taboos, face stigmas and ask for help.

One, zero, one, eight. A phone number that did not exist prior to the crisis but, today, is ready for anyone looking not to face their mental illness alone.

Official signs at the entrance of the office.

Poster which displays the helpline number

The religion is also one of the most complicated issues for the freedom of expression in Kosovo ▪️Visar Duriqi used to be an Iman until he abandoned it and started to report about Islamic radicalization in the country. ✖️ Due the threats that he received, he had to leave his country. 🏃🏽‍♂️ Since 2015, more than 300 Kosovars went abroad to fight with the ISIS. 🏴 Check out this report in www.euroviews.eu / Stories from Kosovo 🇽🇰/ Press Freedom in Kosovo, a post-war country ▪️ or link in bio! 👆🏻 @paulicamara and @sisulopez for @euroviews 📍🎬
The Kosovo war 18 years ago has created an untouchable political class that put Press Freedom at stake making it hard to report against them. 🗞✖️”And if in time you criticize what they do, then you get massive repercussions” explains @unahajdari , a Kosovo journalist and Reporters Without Borders associate. ✖️ Check our this report in www.euroviews.eu / Stories from Kosovo 🇽🇰/ Press Freedom in Kosovo, a post war country ▪️▫️ or link in bio! 👆🏻 @paulicamara and @sisulopez for @euroviews 📍🎬
“During the war, my family and I stayed in Obilic, the village where I come from. Under my house, we had a huge basement where the whole neighborhood could be protected from the NATO boomings. 💣 I cannot remember how many times the bombs hit my house. 🏚 In those times, Albanians fled to Albania and other countries, however, when the war finished, they started coming back. Then, a lot of Serbians fled.” Milic explains. 📍 At 26 years-old, Milic knows what it’s like to flee home because of bombs and violence. It’s happened twice in his life. The first time was after the Kosovo war (Feb 1998 – Jun 1999). ✖️✖️ “Some Albanians started to burn houses. 🔥Then, my father decided to send my sister and me to my aunt in Kraljevo, Serbia.” 👣 They came back one year and a half later 🔙 By 2004, violence against Serbians broke out again 💢 when Kosovo media reported that 3 young Albanian children had drowned in the Ibar River. Despite appeals for caution, television reports quickly asserted that Serbs had been responsible for the incident. 📹🗞 “My father was watching through the window what was happening outside. Albanians were burning Serbian houses again. He told us that if they come to kill us, we should kill ourselves before that happens,” Milic tells. ✖️🔻 Today, He is living in the north Mitrovica, a city separated by a the Ibar River. The North is mainly populated by Serbian. The Sotuh, by Albanians. ❌. Check out his story in www.euroviews.eu / Stories from Kosovo 🇽🇰 or link in bio! 🔹 by @sisulopez #journalism #war #stories #people #life #photojournalism Photo: 📸 Vladimir Milic (26). Background Saint Demetrius Orthodox Church in Mitrovica.
The 21st of June in 1998, the Yugoslav football team played against the German’s 🇩🇪 . Milorad Trifunoviç (50) and his brother, Miroslav (42) watched the match together. The sport clash ended in a 2-2draw, however, due to the football dynamics, it meant victory for the Yugoslav team.⚽️ “That was the last time I saw my brother. We decided to meet the following day to celebrate the victory of our football team. 🥘 I went to the restaurant and I ordered food. The bad news came when I was waiting for him there. 📩 My brother had been kidnapped earlier that morning along with nine other colleagues by the Kosovo Liberation Army (KLA) when they were on their way to work,” Milorad tells. ✖️✖️ After 20 years, Milorad is still fighting to find his remains. He works in an multi-ethnic association of Families of missing people. ▪️▫️”We are trying to find some ways for the future. All the victims are the same, their nationalities do not matter. We are not asking how many Serbians, Albanians or Romans are missing anymore. We just want to find out the truth for the (around) 1.600 missing people. 🔹🔸 Check out this story in www.euroviews.eu 🌎 for @sisulopez #journalism #photojournalism #stories #life #missingpeople #war