Albanians were the biggest victims during the Kosovo war (1998- 1999). Since then, the roles have changed. After the defeat of the Serbians, Albanians became the majority ethnic group leaving the Serbian minority now feeling oppressed in some Kosovo regions.

“You have to go, you are going to come back soon», is what Vladimir Milic`s father told his sister and him when Albanians attacks against Serbians started after the war. » ‘Just go. You will come back soon,’ my father repeated. However, it took us one and a half years before we did come back,” Vladimir Milic explains.

Milic belongs to the largest minority group in Kosovo; the Serbs. There are 146,128 Serbs living in Kosovo —down from around 300,000 in 1999. They speak Serbian, and most are Christian Orthodox.

At 26 years-old, Milic knows what it’s like to flee home because of bombs and violence. It’s happened twice in his life. The first time was after the Kosovo war (Feb 1998 – Jun 1999).

“During the war, we stayed in Obilic, the village where I came from. Under my house, we had a huge basement where the whole neighborhood could be protected from the NATO boomings.  I cannot remember how many times the bombs hit my house. In those times, Albanians fled to Albania and other countries, however, when the war finished, they started coming back. Then, a lot of Serbians fled but a lot of us also stayed here.” Milic explains.

The numbers show that during the last Balkan war Albanians were the biggest victims. However, the end of the war did not mean that the conflict had finished. At the defeat of the Serbs, Albanians came back and some of them came pursuing revenge. Ethnic violence erupted against minorities: mostly against Serbs and Romans. 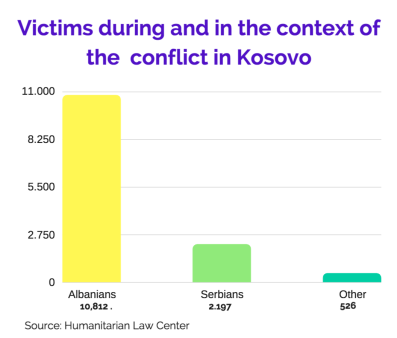 “They started to burn houses. In my [Serbian] neighbored, most fled. Those who stayed were affected. A family next to us was killed. We were the only ones left,” Milic says. “Then, my father decided to send my sister and me to my aunt in Kraljevo, Serbia.”

His parents stayed behind to maintain the house. “My father slept from midnight to 3:00 and my mum from 3:00 to 6:00. During the day, they slept if they could find the time.”  At least once, his childhood home was shot up. “I remember because it was my sister`s birthday. It was during the night, but [my parents] were lucky and they survived,” Milic explains.

After one and a half years, Milic and his sister went back, although the situation was still difficult. Milic says, that even though in Kosovo where he was surrounded by Albanians, it was still better being home than living safely in Serbia.

An ongoing conflict that just finished for Wikipedia

By 2004, violence against Serbians broke out again. In the evening of March 16th, Kosovo media reported that 3 young Albanian children had drowned in the Ibar River. Despite appeals for caution from international forces and organizations, television reports quickly asserted that Serbs had been responsible for the incident.

The breaking news was followed by nearly forty-eight hours of protests and soon escalated into an inter-ethnic conflict between Kosovo-Albanians and Kosovo-Serbs in almost every major town in the country.

“My father was watching through the window what was happening outside. Albanians were burning Serbian houses. He told us that if they come to kill us, we should kill ourselves before that happens,” Milic tells.

Luckily, a group of Carabinieri – an Italian military force on a peacekeeping mission in Kosovo – appeared at their house to rescue them. The Italian force took them to a base in Pristina for five days. “We did not bring anything with us. Just documents. I will never forget. I had just my jeans, a T-shirt and my sneakers. I didn’t even take my jacket.”

Due to the violence, the entire Serb population was forced out of dozens of locations. At least 550 homes and 27 Orthodox churches and monasteries were burned, causing the displacement of approximately 3,600 Serbs.

Since then, Milic and his family have been living in the north of Mitrovica. This northern area has become the most important Serbian enclave in Kosovo where the Serbian government – which refuses to recognize Kosovo’s declaration of independence in 2008 – still has power and influence. For example, the diplomas from the University of Pristina in Mitrovica are granted by a Serbian institution and are, therefore, not recognized in the rest of Kosovo.

Serbs live amongst Albanians with very little integration. Though Serbian and Albanian are equally official languages in Kosovo, Serbs do not speak Albanian and most of them fear travelling within the country.

Signe Borch, PhD researcher of Social Anthropology at the University of Gothenburg, explains that under the surface is a constant emotional burning. There’s the perception of potential violence all the time. “You have vigilante and former paramilitaries patrolling the streets and keeping an eye out. If you are the ‘wrong’ ethnicity, in a wrong place at the wrong time, you risk violence. Mostly, it is quite calm, but you have the sensation of a calm before the storm.”

Kosovo: the heart of the Serbian Culture

Serbs view Kosovo as their cultural heartland. The most important cultural heritage located there are the Orthodox monasteries and churches.

The legendary Battle of Kosovo (1389) between the Serbian hero, Prince Lazar, and the invading troops of the Ottoman Empire lead by the Sultan Murad I, is an important part of Serbian history, tradition, and national identity – an icon of their independence from past Turkish power.

For these reasons, most Serbs are loath to accepted Kosovo as an independent country, even though over 110 states have already recognized this status.

However, while in a political level, the between Pristina and Belgrade facilitated by EU as part of its External Action strategy, agreements in different issues such as justice or travelling have been made – in a social level, the field looks different. “I do not hate Albanians. But I do not like them”, says Vladimir. A common agree to feel that you can get also on both sides (Albanian and Serbian) when you walk around.

Romas, Ashkalis, Egyptians, and Bosniaks represent other minorities groups in the country who also face a certain level of discrimination. Kosovo ranked 46th out of 70 in the 2017 Peoples Under Threat Index, mainly based on self-determination conflicts.

Una respuesta a «Vladimir Milic: memories of a childhood between bombs and violence»