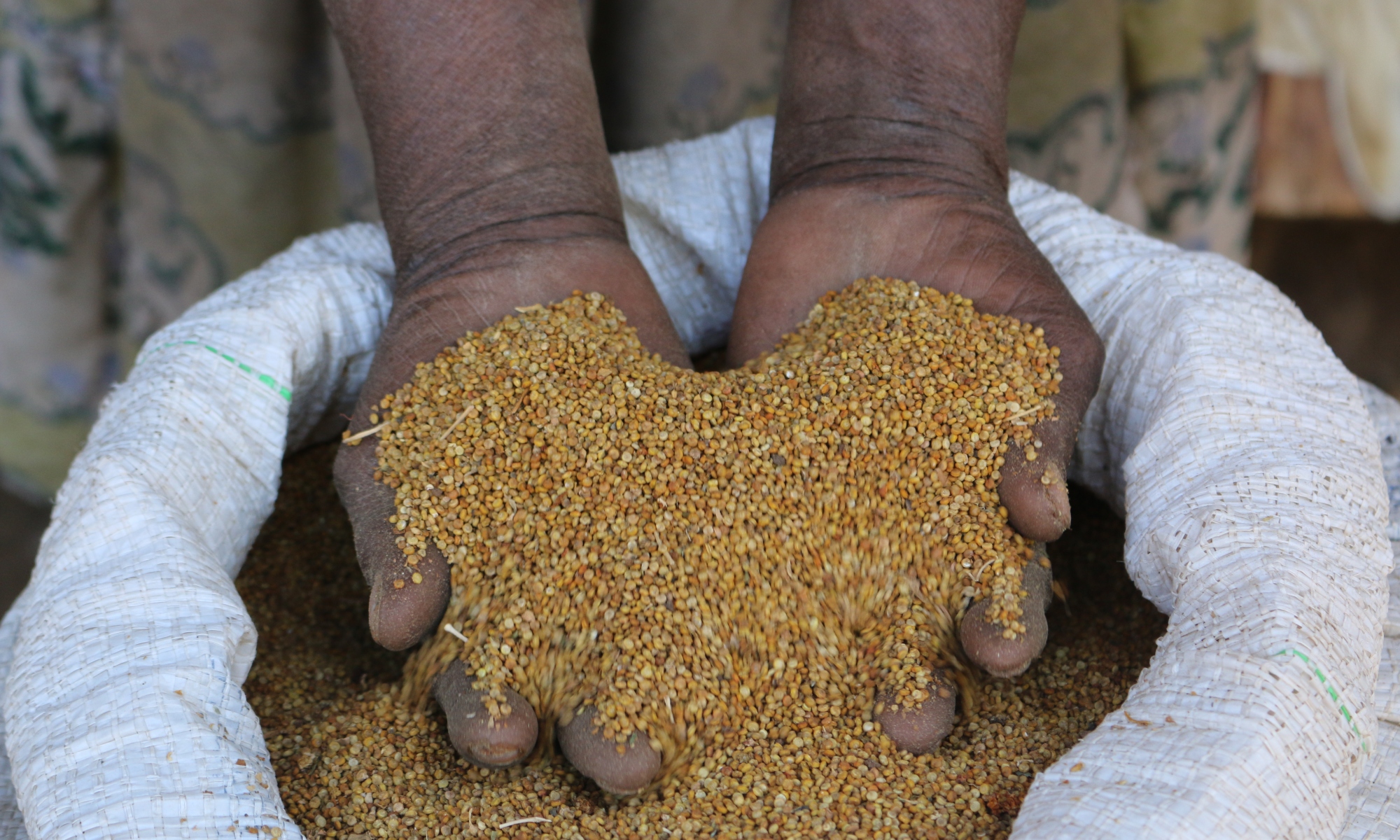 From climate change to a territorial conflict. As a domino game, every domino piece counts and since one falls, all of them fall. During decades, Ethiopia has suffered tragic famines and disaster droughts. Recently, this situation has since increased, pushing people to move to other areas looking for their survival.

It is hot. Ayale Ejigu stops, exhales, and continues walking under the sun. She is carrying an 80kg Quinoa bag. Ayale is a 50-year-old Ethiopian woman. Despite her age, her arms have still enough strength after years working the land. “I am a strong farmer. Quinoa was new to our area”, she says, referring to a new crop that might have the potential to help ending decades of recurring famines in the country. “So, I have worked so hard to make sure I succeed”, she adds.

Ethiopia is located on the Horn of Africa where the average annual temperature is 27º, and has no sea surrounding it. It is the most populous landlocked country in the world. In spite of this, Ethiopia knows the power of the water and the destruction that lack of water leaves behind: a drying land where the Ethiopian farmers, like Ayale, fight against the nature to get their feed.

Malnutrition and drought are the day-to-day battles of this state of Africa, one of the poorest and hottest countries in the world. There, the DanChurchAid (DCA), an independent Danish organization, is implementing a project based on the small quinoa seed.

“We have helped introduce the crop in Ethiopia for two main reasons: first, quinoa has properties that help withstand drought and the changing climate in Ethiopia, and second, quinoa is very nutritious, rich in proteins and the micronutrients that poor people are most in need of”, explains the Right to Food programme adviser,  Mette Lund Sørensen.

Thus, quinoa could be a solution for, or at least to palliate, some of the effects of the hunger and to face the consequences of the climate hits. Furthermore, it only requires a small amount of rainfall to grow, which strengthens its prospects in Ethiopia, where the lack of water is a big issue.

The East and Horn of Africa are experiencing the worst drought the region has seen in decades. Ethiopia, Djibouti, Kenya and Somalia are the countries worst affected by around 16 million people needing humanitarian intervention, according to the International Organization of Migration (IOM).

In concrete, Ethiopia has a long experience dealing with the consequences of droughts. During the last 30 years, seven big ones have taken place there, provoking terrible famines. Some of them, like the humanitarian catastrophe in 1984-1985, symbolized Ethiopia as a country of poverty and hunger. More than one million people died.

During the period of 2002-2003, a new episode in the Horn of Africa risked the lives of 12 million people and originated the displacement of thousands of people. Later, in 2016, three failed rainy seasons resulted in Ethiopia’s worst drought in 50 years.

The climate expectations for 2018 do not show a more optimistic view. The National Meteorological Agency (NMA) has forecasted that the 2018 spring rains in the current drought belt could potentially be erratic and could underperform. 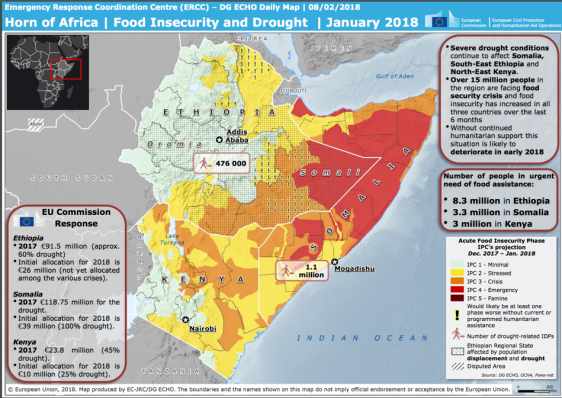 Ethiopia has an agricultural culture from its deepest roots. More than 80% of the Ethiopian population lives in rural areas and it is the industry of employment for 72,7% people, according to the CIA World Factbook. Moreover, World Bank data shows that 37% of its GDP comes from the agriculture.

For a pastoralists society, water is the source of all life and the basis of their livelihoods. However, Ethiopia is one of the worst countries in water supply infrastructure. At least 61 million Ethiopians, according to Water.org, face a day-to-day lack of access to clean water and around 65 million lack improved sanitation provoking, among other illnesses, cholera or diarrhoea –the leading cause of death in children under five years old in Ethiopia.

If a link in the chain is broken, the pieces begin to fall one after another. Without water, there is no pasture for their animals, and without animals, there is neither milk, meat nor income for families.

Significant livestock deaths have been reported. Crop production losses are taking place. The strong floods, the continuing flash flood and the consequent devastating droughts are destroying the countryside. Neither seed nor animals are strong enough to resist the climate shocks.

Then, the two previous pieces push the last one, the one reserved for humans, and it falls. Last August, 8.5 million people requiring relief food assistance as a result of the impact drought and large-scale displacement in the southern and southeastern lowland areas of Ethiopia, according to United Nations Office for the Coordination of Humanitarian Affairs (OCHA) report. Furthermore, UNICEF  has calculated that roughly 320,000 children will need treatment for severe acute malnutrition in 2018.

When climate could be the starting point of a conflict

The hard living conditions and the almost impossibility to survive in an area where nature can barely exist have pushed people out of their homes. More than 528,000 Ethiopians have had to move from their villages because of climate-induced factors.

The Refugee Studies Center called them ‘Environmentally displaced people’, those who are impelled or induced to migrate because their livelihoods are rendered unsustainable by proliferating natural disasters or the irreversible degradation of environmental resources resulting from the slow-onset impacts of rising sea levels and desertification.

Beyond the climate´s direct consequences, the weather conditions can also affect the political stability of a country and a challenge for development.

Marshall Burke, an Assistant Professor from the Center on Food Security and the Environment of the Stanford University, has lead a research about the potential impact of global climate change on armed conflict. He has estimated a 54% rise in armed conflict incidents by 2030, based on historical linkage between temperature and conflict and using climate model projections.

Studies of both Ethiopia and Somalia show that lower precipitation levels are associated with a higher probability of conflict onset. “As most of Ethiopia’s production either comes directly from the agricultural sector or relies on agriculture for its raw material, the lack of precipitation results in lower agricultural production levels which in turn results in higher conflict” supports a study of the Institute of Development studies.

Precisely, it is notable that in Ethiopia roughly 1.085 people have been displaced due to the conflict, mainly the one along the borders of the Oromia and Somali regions. The territorial competition, often leading to disputes over resources, wells and grazing lands, is one of the main causes of this conflict.

Quinoa does not have to be “the” salvation for Ethiopia. But it could be a remedy. Sometimes, we forget to look for the deep roots of what is happening, and climate change could be the starting point for starvation and a conflict afterwards.

From the heart of the earth, the small South American seed grows up, surviving against the drought and the floods. Then, quinoa crops provide food for animals and people. Also, it saves water because it does not need a lot and it can be reserved for human consumption. Finally, Ethiopians may be able to stay in their land, improve their living conditions and, with a better quality of life, also the perspectives of a conflict could be reduced.

The DCA Ethiopian team are happy with the results, but they are aware that there are still a lot of things to do: “We have to convince people to trust on this new food, to introduce in the market and to show them how to cultivate it. We are on the way”, explains Assefa Hailu, the chief director in the country. However, what this also means is that before structural problems, they need innovation and looking for solutions – and quinoa is performing well.

From a handful of quinoa seeds (0.2kg), Ayale harvested about 80 kg of quinoa on her first harvest. During the first year of the project, Ayale and around 200 other beneficiaries’ farmers have harvested on average 15-40kg of quinoa. For Ayale and her community, the project has meant a light of happiness and hope in their hearts about the future of Ethiopia. 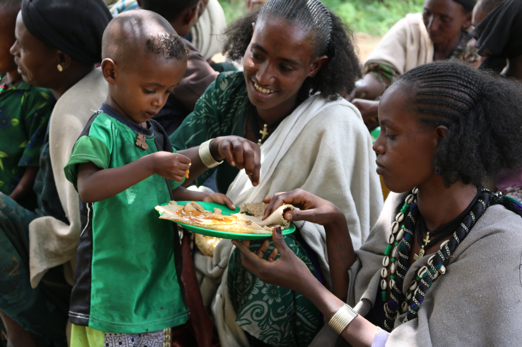